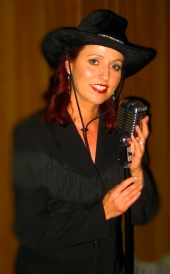 DESCRIPTION: Everyone loves Patsy Cline! From her first appearance on Arthur Godfey’s Talent Scouts in 1957, she became an overnight sensation. She is often called Country Music’s greatest female singer and this insightful and moving tribute to the first female Country artist to be inducted into the Country Music Hall of Fame captivates audiences and brings Patsy Cline’s story to life.

This show can be presented as an intimate performance with piano and voice or with accompanying recorded tracks or a live band. This show also can be customized for any size venue or audience.

CONTENT:
Patsy Cline’s life was short but filled with drama and perseverance and, of course, glorious music. In this riveting tribute show, Laura Sable shares these wonderful tunes and tells the incredible story of this superstar’s trials and tribulations. Musical accompaniment is provided by her husband Bill Wiemuth on piano. You will hear Patsy’s best songs such as Crazy, Walkin’ After Midnight, I Fall to Pieces, She’s Got You, Sweet Dreams and many more.

MEET YOUR ENTERTAINERS:
Laura Sable and Bill Wiemuth have worked as a musical duo for the past 16 years. With Laura’s versatile vocal-stylings and Bill’s skill on piano and vocals, they have performed their custom-produced shows for hundreds of delighted audiences for cruiselines, theatres, cabarets, corporate events and much more. Laura has been a Patsy Cline fan since she was a child and has researched her life and music for many years. Having included Patsy Cline in her Tribute to the Great Ladies of Song tribute show for the past 15 years, Laura was amazed that she was consistently asked to give Patsy her very own tribute show. Well, in 2012 she did just that and whenever Crazy for Patsy Cline is playing, she packs the room!