“Woody Guthrie: Tunes and Tales of the Columbia River” 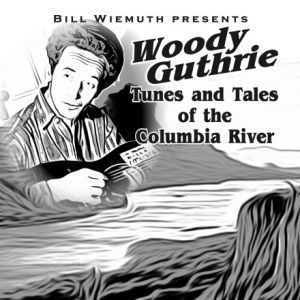 DESCRIPTION:
Bill Wiemuth shares the fascinating music and curious true story of a 1941 partnership between the Federal Government and an incredibly talented young folk singer named Woody Guthrie. As the tale unfolds, Bill periodically grabs his guitar and performs several of the riveting songs that Guthrie wrote, capturing the struggles of the people, the beauty of the scenery, and the incredible development of the region. This show can be customized for any size venue or audience.

CONTENT:
Bill tells the unusual story of how folk singer Woody Guthrie became contracted by Federal Government to compose songs about the Pacific Northwest. Quotes from the story’s characters add an intimate and personal meaning to the experience. Bill also performs on guitar and sings several of Guthrie’s songs including Roll On, Columbia; The Oregon Trail; It Takes A Married Man; Talkin’ Columbia, Pastures of Plenty, and more.

MEET YOUR ENTERTAINER:
Bill Wiemuth keeps audiences spellbound with fascination during his live, history-themed concerts and presentations. These performances share the incredible stories of those that endeavored to develop what is now the western United States. For more than a decade, Bill has delivered hundreds of performances to delighted cruise and theatre audiences across the country. Many of these projects have been recorded for the River History Audiobook Series produced by RiverHistory.com.